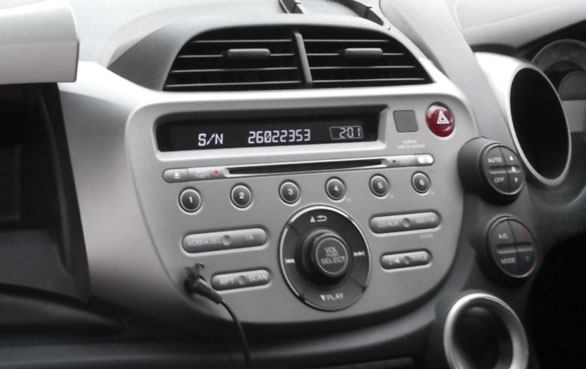 All Honda Radio Code Free Unlocks, all models covered including CD player or Sat Nav from new. The quickest way to obtain the code is by using the serial number and unlock your Honda radio online, and whats more its a completely free service.

Use our Honda Radio Code Generator completely free of charge and unlock your Honda stereo in just a few minutes.

How to find my Honda serial number

Get your serial number from the radios label

Removing the radio is a 100% guaranteed method of finding your honda radios serial number.

In most cases, holes are located in each corner of the radio which require radio release keys.

If your stereo does not have these pre-made holes, remove the plastic trim surrounding the unit and 4 screws hold the radio in place.

There are numerous different radio label variants, the below example is the most popular label example. 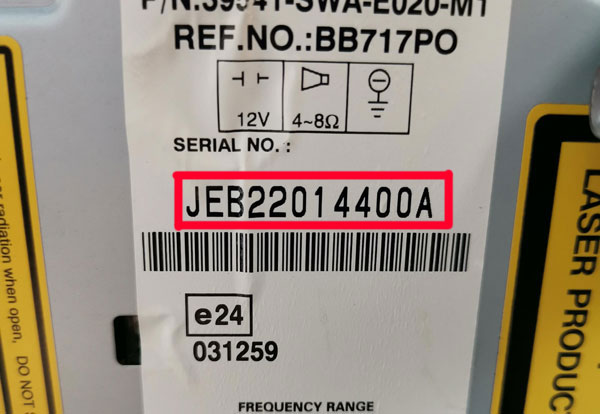 Turn ON your sound device and enter the code using the preset buttons. Once entered completely, the radio should start working automatically.

When the radio is turned on 'CODE' should display on the radios display.

Repeatedly press button 1,2,3 & 4 until the correct digits of the code is displayed.

To Input Your Honda Radio Code, simply press button "#" or "5" and your radio will start to play. 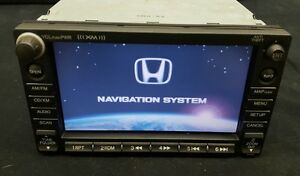 The serial number displays on the screen in most cases, all radios can be decoded apart from serials beginning "4000". Most are displayed on-screen beginning "2200".

If the serial number is a 4000 series radio, these must be taken to a local Honda dealership for security checks before the code is given. They are the only serial which cannot be decoded online.

"Code Err" displayed on the radio when the incorrect code has been entered into the radio system more than 3 times.

It is important not to enter any more codes into the Honda stereo as this will completely lock the unit.

First disconnect the battery from your car for 30 minutes, once re-connected the radio will let further attempts of entering the radio code.

It is important not to keep inputting the incorrect code into the radio as this will completely lock the radio, if locked the radio must be taken to a local Honda Dealership.

Why do I need a radio code for a Honda?

A radio code is designed to be a theft deterrent, the code is kept on a secure database which flags if a Honda stereo has been stolen. The code is charged to the customer from the dealerships.

The code is set by the manufacturer (not the first owner), so the likelihood the radio is set to "1234" are little to none. 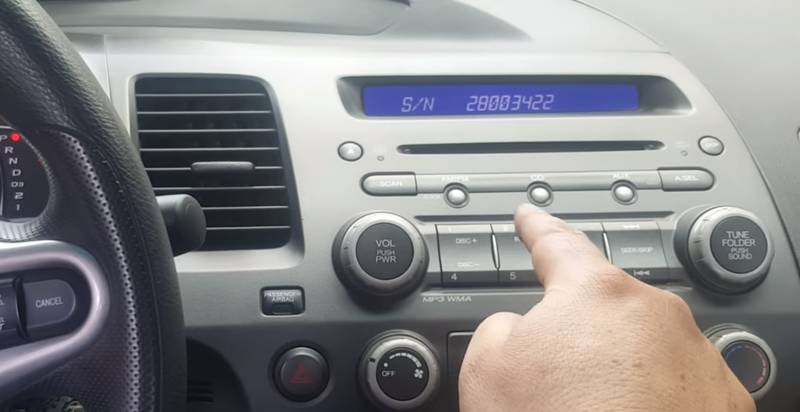 FAQ's
What Countries Do you Cover?

All Countries are unlocked we unock every Honda which includes America, Canada, Europe & Asia every coutry as long as the vehicle is a Honda we can unlock the radio for you!

How To Do A Honda Radio Code Lookup?

We unlock Honda radios using the official database, in some cases two codes may be given. This is due to the different model variations.

Using our Honda Radio Code Generator it is completely free of charge and the code is sent within 12 hours to the email address.

Why Do I Need A Radio Code?

Radio codes are needed when the power from the battery is disconnected from the unit, this can be when mechanics need to disconnect the battery or it goes flat.

The code is put in place as an anti-theft measure that does not allow thieves to re-use the radio if taken.

Why have I been given 2 radio codes?

This is due to Honda radios have two model variations, often the codes given will be one 4 digits long and another which is 5, one of the code will be the correct for your stereo.

Will entering the wrong code lock the radio unit completely?

The radio will not lock completely after the first 3 attempts, after the third try the radio will go into a 30 - 60 minute wait period before any more codes can be entered.

The maximum until the radio is completely locked is 11 attempts, if this is the case the only way to unlock your Honda radio is taking the radio to a local Honda dealership which can cost in excess of £60.

What year Honda radios can we unlock?

Every year from 1995 all the way up to the present year models, all we need the correct serial number and the code will be sent to the email address that is provided.

Get your Honda Radio Code Free, just enter your serial below:

Get your Honda Radio Code Free, just enter your serial below: